Ahhhh the life of a father of two. Weekends are a Blast Blast Blast… Birthday parties, hockey rinks, play dates..It doesn’t get better then that. The highlight for me is always the trip to the grocery store on Sunday afternoons. Usually I have at least one with me and then usually,”daddy I want” ensues. Well, sports fans, this Sunday was a tad different. One of the kids was at birthday party and the other was with Mrs. TSM and LT’s family skating. I was at the grocery store SOLO… Excited about where this going yet? (For what its worth, Berger’s column today is more of the same on Wilson v Cherry, which we talked about last week!). Anyway, the store I hit most Sunday’s is frequented by a feb local celebs, most in the sporting arena. I have seen a few current buds there and I used to see JF quite often too. I have never been the least bit interested in any of those I have run into. I see quite a few of the athletes in this city out and about. I see a few of the media personalities from time to time too. Bill Hayes is often at the same TD branch I bank at. Kyreos’s kid plays soccer where little TSM does, so I see him most Saturday’s in the sring…. Again, a bit of a yawner, nothing really interesting…I digress.

Growing up a Maple Leaf fan in this city, we have seen a ton of players don the blue and white. Some we remember more then others. I don’t know why but some obscure ones seem to stick with me more then others… There is one player who was a huge favorite back then. I remember watching this guy every Saturday night, waiting for the black haired Dave Hodge in the those lovely baby blue blazer: 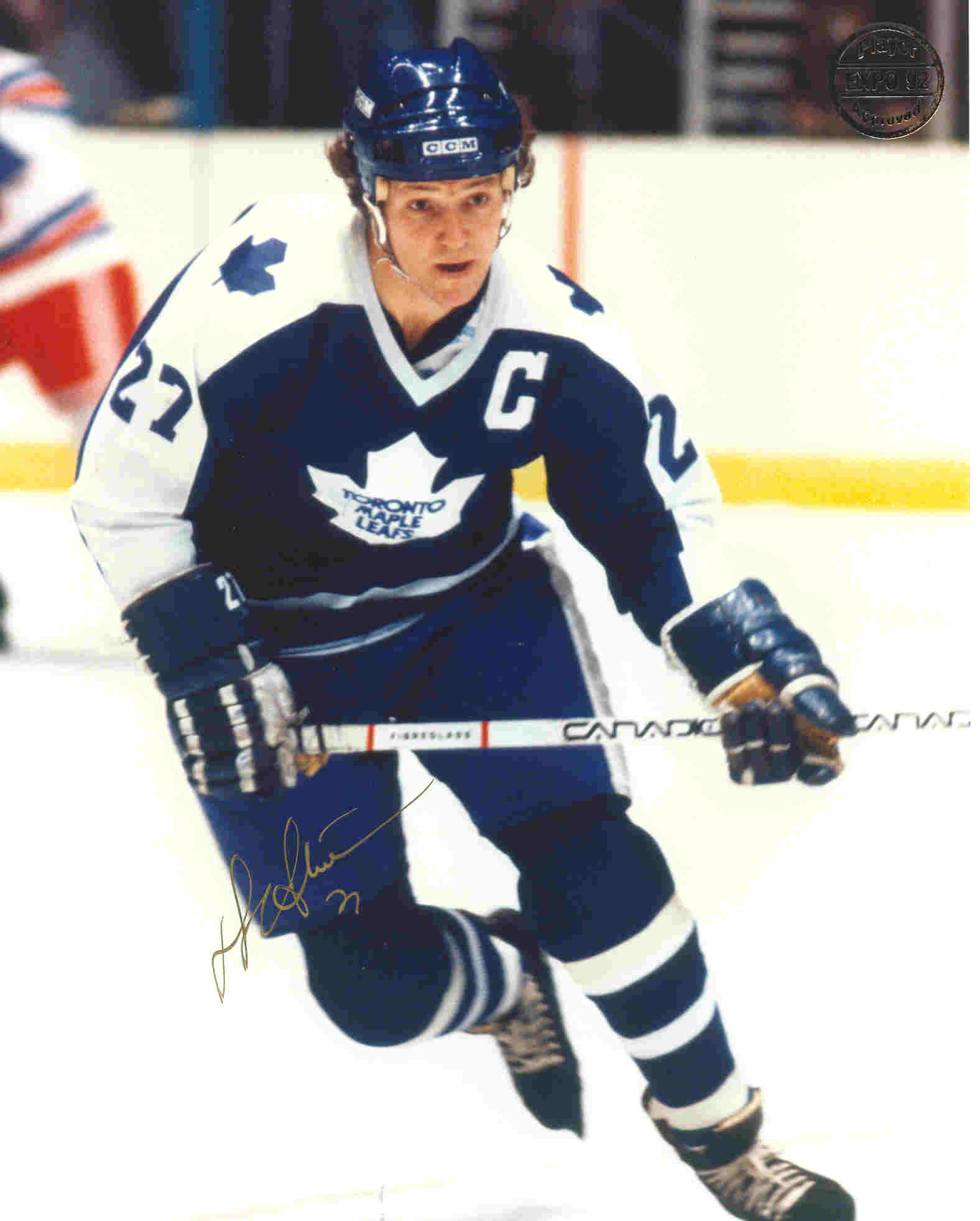 In my life (at least those I remember), there has never been a better Maple Leaf then Sittler. I remember so many a night down at the Gardens, or on the tube watching number #27. I also remember getting Sittler’s autograph when I used to see him around town, he often was at a booth signing autographs during charity walks or other community events.

As I was walking the aisles at the store today, minding my own business, I was totally taking by walking by Sittler not once but 3 times. He clearly knew I recognized him as he smiled at me. I am sure it was the goofy smile on my face. I was excited to see him as I was back in the day. I was not alone. 3 different people asked me as I was checking out (and paying for plastic bags) if that was indeed the Captain. He obviously had as a big an impact on others as he did on me. The really funny thing is, I didn’t know what to say to the guy. I was totally tongue tied. I didn’t have a camera and I didn’t think fast enough to get him to sign a package of oreos or something. When I got home, I told little TSM that I have seen my boyhood idol today. He asked a ton of questions, including, “who is MY boyhood idol?” A great question to ask, don’t you think…..

By the way, Sittler looked great…I hope the ribs were good Darryl!

I remember noticing Wendell walking along side me with his wife and kids in a baby carriage beside Holt Renfrew almost a decade ago.I was lost for words.I was the first fan to get his autograph after he was drafted,Keith Gretzky signed my draft ticket also,but sadly I lost it.

I remember years ago running into Eddie Belfour and his son at Shopper’s Drug Mart… weird to see him out of his element, he was scruffy and buying up deoderant and toothpaste… didn’t quite do it for me… seeing him a few years earlier when he was a young superstar might have been more meaningful, maybe because he still didn’t give my Leafs a cup… I won’t go into why Russ Courtnall had Friday night dinner with me and my family years and years ago… oh, the grind line… those were the days (when we were still losing…)

Welcome aboard CP! Was Belfour bribing the shopper’s checkout person with a billion dollars for a discount??