He Hate Me…. A New Upstart Football League 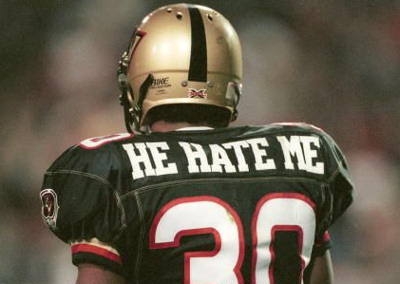 Well with the NFL and NFLPA about to head down the CBA battle road there is word of a new league….

“Led by former NFL executive and agent Michael Huyghue as commissioner and prominent sports marketer Frank Vuono as chief operating officer, the season has been financed through $30 million of capital provided by a group of investors including investment banker Bill Hambrecht, Google senior vice president Tim Armstrong and Paul Pelosi, the husband of the Speaker of the House, Nancy Pelosi”

Now, none of the above are Vince McMahon, but they are some interesting names.

The league is due to start in October of this year in : Hartford, Las Vegas, Los Angeles, Orlando, New York, San Francisco, Sacramento with potential opportunities in Salt lake City, Monterrey

I love this from the commissioner’s blog:

“Fourth, the UFL makes sense because it is played in the fall when people traditionally want to watch pro football. Other spring leagues have failed to maintain a consistent viewing audience. We believe (and our television partners concur) that playing in the fall on Thursday and Friday nights provides the widest audience of professional football fans.”

and this one is even better:

“Finally, and perhaps the main reason that I believe the UFL will succeed is that it is based upon you, the fan. The “U” in the UFL is really intended to address “you.” We will be offering an IPO structure where fans get to own a piece of their team. This isn’t a cosmetic stock certificate but real shareholder equity. Our fans will be instrumental in selecting our team nicknames. On controversial decisions, like whether or not to bring Michael Vick into the UFL, we will rely on online fan-voting on our official website. Fans will influence some of the innovation in rules that we will employ (i.e. field goals over 50 yards are worth 4 points). We will use technology to bring the fan closer to the game. The coach-to-QB communication system is designed to bring fans right into the huddle and on the line of scrimmage. You’ll get an opportunity to follow your team into the locker room at halftime to finally get the true behind-the-scenes footage never shown before.”

Something tells me someone affiliated with this will be on Mccown’s show this week….Or Darren Rovell the writer himself…

You can read more from CNBC here