Can The NHL Catch This Wave 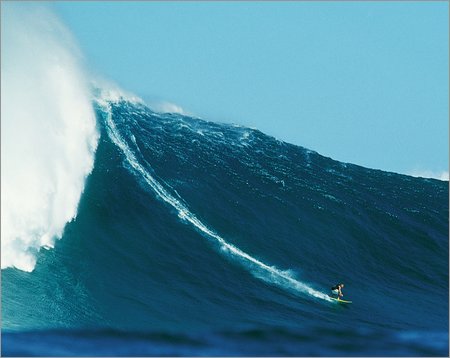 Like Bodi in the movie Pointbreak, who spent years of his life waiting for the BIG WAVE, the NHL too has been waiting or the next wave of talent to take over for the older guard. Fate has handed Bettman Inc. the dream match up that the league desperately needs. Alexander Ovechkin and his Washington Capitals vs. Sidney Crosby and his Pittsburgh Penguins is a marketers wet dream. The NHL has to do everything in it’s power, spare no expense to make this the key event of the year. This is bigger then the winter classic. It is way bigger then the all-star game, the olympics, draft or gulp, even the awards show in Las Vegas. This, is the NHL’s version of the superbowl. For 4-7 nights the 2 premiere young stars of the league are going to be in the same arena on the same ice, going head to head. Here in Canada we will get our fill. South of the border, things aren’t as clear. Game one is already operating under an ominous cloud. Should the game run late on NBC it will run into the Kentucky Derby. NBC will pull the plug, or in this case ripcord, sending the game was up the dial to Verus, the little network that couldn’t. Can you imagine the game about to go into overtime and the plug gets pulled??? Forget about trying to build an audience, how about serving the one you do have???? This is the time for the NHL to dot every i and cross every t. Pay stars to go to the game (the better looking the better! This is the time to make the game cool, to make it appear hip. They have to get this right, they have to make this huge and they have to pull it off. With all due respect to the other teams in the other series, the light has to shine here and it has to shine brightly.

In this league there are no guarantees. Who knows when the next time these two guys will face off in the playoffs. It may not be for a while. It may be the start of an annual thing. There is little question, that these two guys are the most marketable guys around. The league, the PA and the sponsors can’t afford to blow this. They have to catch this wave and ride it for every drop of attention they can get.