The CFL’s version of Spygate 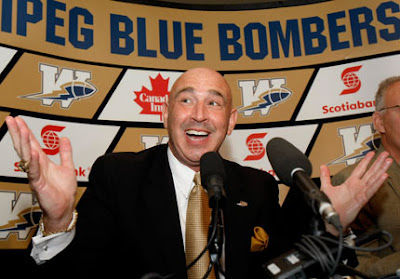 The Winnipeg Blue Bombers and Hamilton Tiger-Cats will lock horns in Steeltown tomorrow for second place in the CFL’s East Division. But that’s not really what you care about, right?

On Tuesday, a Winnipeg scout was found watching the Ti-Cats practise with pages of notes on formations. Though the Bombers organization was aware the man was there, they insist they did not send him to spy on the opposition. Regardless of the claims, it ruffled some feathers in Hamilton.

“I think it was pretty stupid. If you’re going to do something like that, why would you go and sit in someone else’s park? Get in the apartment across the street with binoculars or something,” said general manager Marcel Bellefeuille.

Predictably, Winnipeg head coach Mike Kelly tried to dodge the issue as much as possible on Wednesday. “Non-issue. Handled internally. I’m not talking about it,” he said.

Take what you will from his short, prickly answers, the bottom line is that only two weeks into his first season as a CFL head coach, it’s clear Kelly does things his way. How else could you explain the releases of his top two quarterbacks (Kevin Glenn and Ryan Dinwiddie) and the fact that his squad has more than 30 newcomers from last year’s playoff team?

Kelly’s hard-nosed approach seems to be rubbing off on his players, who upset the defending Grey Cup champs last week, and missed a last-second field goal in Week one that would have forced overtime in Edmonton.

If the accusations against the Bombers are true, there would be some precedent. In 2004, the CFL’s alltime winningest coach, Don Matthews, was caught stealing signals. He went beyond offering a confession, attempting to justify his actions.

The scout’s credentials have been revoked for tomorrow’s game, a far cry from the $500,000 New England Patriots coach Bill Belichick was fined in 2007 for using illegal cameras. And that certainly isn’t in the same conversation as the $100 million McLaren was fined for spying on Ferrari in the 2007 Formula 1 season.

Nevertheless, don’t expect the players on the field to sweep the incident under the rug so easily. I’m predicting at least two unnecessary roughness penalties in the first quarter…