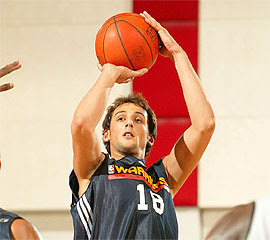 “The deal is done, Belinelli for George

For almost a year, Raptors GM Bryan Colangelo has been chasing guard Marco Belinelli of the Golden State Warriors.

A conference call to confirm the deal is scheduled for late Thursday morning as the Raptors have traded Devean George and “a little bit of cash” to Golden State for the 6-5 guard from Italy.

We’ll have more on this in the morning, and its implications on the possible signing of free agent Carlos Delfino but the deal provides the kind of shooting off the bench and depth the Raptors covet.

Belinelli averaged 8.9 points and 2.1 assists per game with the Warriors last season. The 23-year-old is comfortable playing both guard position spots and has been a target of Colangelo’s for a year.”

My reaction to this is “awesome,” at least until we know more. Even then, I’m pretty sure it’ll be something between that and “good.”

Basically, the Raps trade a guy who was hardly going to play, on the downside of his career, for a 23-year-old who’s shown plenty of promise in the past.

Take a look at that picture above – That’s what Raps fans should (hopefully) get used to seeing. This guy can flat out shoot, and all indications are that he actually wants to use that skill in games (as opposed to Mr. Kapono). He’s also pretty cheap and should be a solid scoring option off the bench. Golden State simply had too many wing players and ball handlers, whereas Toronto certainly has a spot for someone like this.

Hopefully he brings his best to the Raps and earns a rotation spot. I think he has a great chance to see minutes, but he’ll have competition, and that’s also a great thing. He, Demar DeRozan, Quincy Douby, Jarrett Jack and maybe Carlos Delfino will all by vying for minutes at the 2-spot…compared to last year’s team, that’s incredible.

Well done, Mr. Colangelo. He could have stopped trying to deal, but is once again trying to improve the team. Awesome.

Here’s some video of Belinelli tearing up summer league last year – Yes, he sure can shoot…