Poll: Who Will Be The Maple Leafs Team Captain?

According to Sportsnet, Ron Wilson has named the 3 players that will wear the ‘A’ as alternate (not assistant) captains this season.  I don’t think you’ll be surprised with the names on the list…Kaberle, Komisarek and Beauchemin.

What did come as a surprise is that Wilson said that he expects that one of the three ‘A’s will be wearing the ‘C’ by the beginning of November.  Are we entering another Rob Ramage period where we choose a short term solution?

Don’t get me wrong…I’m a big Kaberle fan and love the Komisarek and Beauchemin pick-ups…I simply don’t know enough about the two new guys and their ability to fill some pretty big shoes.  The list below includes some top notch leaders.  Do the guys above fit the bill?  Do you see the next Armstrong, Kennedy, Apps, Gilmour, Clark or Sittler?

I don’t see Kaberle as the guy….he’s a long time member of the team but doesn’t seem to be the vocal / leader type.  If he was truly the guy, why didn’t they make him the captain last season?  In addition, he’s going to continue to be a target for trade rumours.

I’m going to vote for Beauchemin – not sure why other than I really liked how he played in the pre-season.  I think everyone knew he was good but was likely overshadowed by Niedermayer and Pronger in Anaheim.   He’s a veteran with a Cup…that alone should help command respect.

So let’s put the question to the TSM readers….Who will get the ‘C’?

NB: I came very close to adding another option…Mats will come out of retirement and wear the ‘C’

As you consider your selection, take a look at some great Leafs captains: 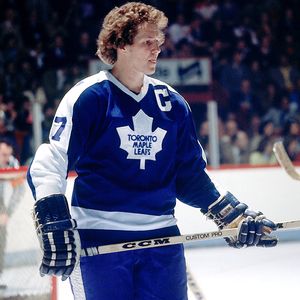 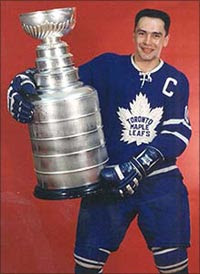 Frankie was part of the Big Three in Anaheim. He has a ring. He was often overlooked for his incredibly solid play in Anaheim. He looks to be playing 26-30 minutes a game this year. Have to give it to him, but I have no idea what he’s like in the room. Kommy might be fantastic in the dressing room so maybe he gets it. Kaberle great offensively but we’re not going to go with him for so many reasons. Look for Beauchemin with the next C on his glorious Leaf jersey.

I dont know where this guy is getting his ibfo, Kaberle as been with the leafs for over 10 years, was drafted by toronto and never left them, he is curently the best player on the team right now leading in points and assists beachemin is a good player but he is new the the troronto franchise, young players that are on the team have a lot to learn from kaberle and i think we as fans should look back and remember how much kaberle as been their, was he there when toronto was kinsidered a winning team? yes, was he there when the best captains (clark,sundin,gilmour) played together? yes is he still here during toronto’s stugle to make playoffs since 2004? yes, should he be captain? yes