Who’s the Man in Minnesota? 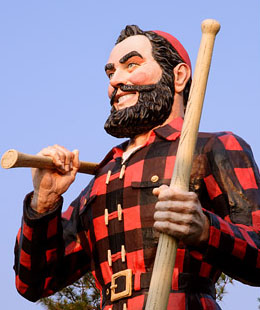 Earlier today in a discussion about NFL MVPs with a couple of football fans, we each had Peyton Manning and Drew Brees at the top of the list in either order. We also talked about other players who will get consideration, and of course anyone who’s been following the NFL this year knows the Minnesota Vikings are an impressive team with several worthy candidates. In fact, all three of us had a different player as Minny’s MVP. One for Brett Favre, one for Adrian Peterson, one for Jared Allen. How rare is it, eight weeks into a season, to have three separate players considered an MVP for one team? I thought about all three arguments and made my pick, but here’s the case for Favre, Peterson and Allen.

Obviously, his numbers are impressive. He’s led the Vikings to two victories over the Green Bay Packers, including yesterday’s 4 TD performance. His Week Four comeback win over San Francisco was vintage Favre.  He didn’t look too strong in Week Seven against Pittsburgh, but he’s on pace for his 13th season with over 3,800 passing yards. More than the numbers, Favre gives Minnesota security at the quarterback position – something they haven’t had in years. And more often than not, the player recognized for a team’s solid play is the quarterback.

Arguably the best running back in the National Football League, the main argument for Peterson doesn’t come from his stats, yet what he opens up for the Vikings. A popular stance is that without Peterson to draw defences in, Favre wouldn’t have all the single coverage and open receivers to throw to. That is definitely a large factor. He is on pace for about 200 less yards than last year, but his team is winning. And more importantly, he’s taking better care of the football. In 2008, he fumbled nine times, losing four of them. This year? He’s only fumbled twice.

Allen has been statistically the best pass rusher in the NFL this season, and is the key cog of Minnesota’s defence. He torments opposing quarterbacks into poor decisions, and provides tremendous energy for his teammates to feed off of. He also looks primed to set a personal best for sacks, eclipsing his 15.5 in 2007 while with the Kansas City Chiefs. He’s also deflected two passes, and has a safety.

At this point of the season, I have a hard time not giving it to Favre. The main reason? Last year the Vikings had both Allen and Peterson. They finished 10-6, but were never considered true contenders in the NFC because Tarvaris Jackson was their quarterback. Add Favre to the mix this year, and they’re 7-1 and hold a two and a half game lead in the NFC North. Take away Allen’s two games against the Packers, and he’s only got three sacks. Peterson draws defences in, but when the Vikings are up big and attempting to run out the clock, he’s not exactly putting the nail in the coffin (see yesterday’s second half versus Green Bay). Favre had a bad game against Pittsburgh, but I’m sure fans of the Purple and Gold will take one bad Favre game over Tarvaris Jackson any day.

– if you look up ‘fraud’ in the dictionary, you’ll see the New York Giants’ logo

– after Derek Anderson’s 6 of 17 for 76 yards and two pick performance yesterday, Eric Mangini has to turn the Cleveland Browns back over to Brady Quinn – permanently