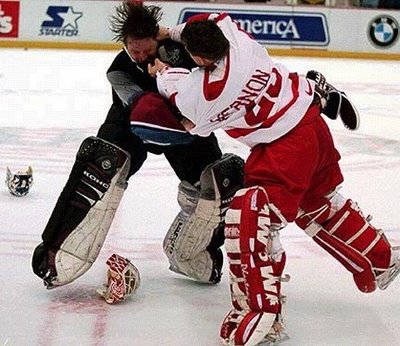 There is always the debate when a goalie gets hammered when he is leaving the net, is he fair game, or does he live by different rules than all the other players.
Canadiens goalie Carey Price left the net to play the puck Wednesday against the St. Louis Blues. No different than any other night, except for one thing. Cam Janssen of the Blues ran into Price, causing everyone in the hockey world to lose their minds.
Price then proceeded to try and fight Janssen, but a Habs defenceman wisely jumped in and saved the Price from damaging some of his most valued assets…his hands.
The fans love the goalie fights, but there are people who don’t like watching them, they are called management.
For a player who wears larger equipment than the rest of the players do, they’re given special treatment. Why?
The value to their teams? If they are such a large asset, management should tell the goalie, play the puck in and around the net, don’t venture too far out for one simple reason, what happened to Price on Wednesday.
After I watched the hit, I thought Price dropped his shoulder trying to hit Janssen back. If Price had gotten a hold of Janssen and dropped him, he would’ve been standing over top of him, admireing his work, like Manny Ramirez admires a moon shot.
If goalies want to play in the same area, make them play by the same rules.
Place the same interference rules on the goalies that the players have to comply with. Touch the puck, there is a risk you will get hit. After you release the puck, you can’t be hit like everyone else.
Goalies run interference all the time in games, especially in and around the net. They get away with murder with some of the stuff they pull in front of the net, a la Martin Brodeur on Sean Avery when everyone went crazy that Avery was blocking his view with his stick.
I don’t condone hitting goalies, because they face shots all night long. There are certain rules inside the crease with respect to players, so when the goalie leaves the safety of his crease, he should be governed by the rules that are in place for the players.
He wants to skate with the boys, you play by their rules.

contact between goalies and skaters happens so infrequently that it’s not worth getting too excited about but i agree that goalies tend to take advantage of their protected status. i have never seen any major injuries to goalies as a result of being hit when playing the puck so i’d generally be in favour of making them fair game.