All Tiger Woods All The Time 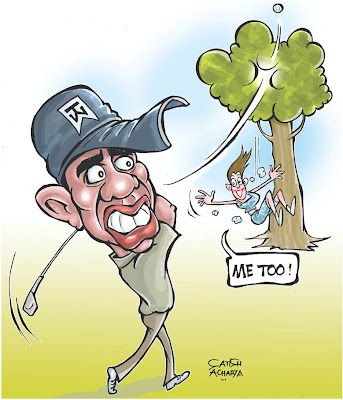 It was quite funny listening to the sports shows today, hell, it was funny listening to all the radio shows today, sports or otherwise. All the talking heads had an opinion, most when stripped down, where saying the same thing: Shame on Tiger for being egotistical, for being the Tiger Machine, for not respecting the game, for taking the story away from the game, a tournament under his old sponsor’s name. Yes he didn’t break the law, but he has handled it poorly. Does that seem about right?

What’s astonishing to me is the coverage this prepared read statement is getting the day before it happens. During tonight’s Canada vs. Switzerland hockey game, CTV was promoing it’s live coverage of this staged, 1 camera, pre-selected media, 1 way, no question conference. It was a full sale press. The local radio stations are coaxing listeners to tune in, in case they get the rights to cover the read statement.

Now, I like watching the train wreck as much as the other guy. So don’t get me wrong. This however reeks. The guy’s a great golfer. He may be a total schmuck, but he is a great golfer. His machine is trying to control the story, and the saps are allowing them too. By blasting the fact that the Tiger press conference will be carried on their network they are feeding the beast. I am very far from perfect, but I can tell you I won’t be tuning in. I’m the idiot who works from home on NHL trade deadline day. I’m the guy who watches the NFL/NBA draft without really knowing the kids being drafted because I like the excitement. This Tiger Woods thing????? Nope. I am not going to watch. I’ll read about it. I’m sure it won’t be avoidable on twitter, the net, radio and tv.