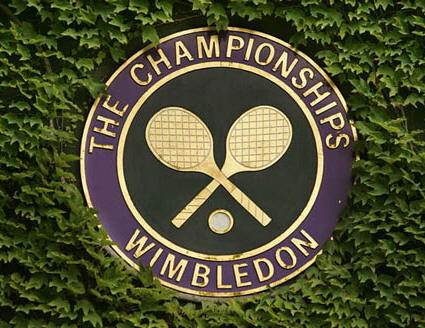 Week two at Wimbledon has some serious work to do if there is any hope of topping week one!

Let’s recap… we’ve seen Roger Federer scratch and claw to make it through the first two rounds after dominanting the field at the All-England Club for the last seven years. Ditto for Rafael Nadal who hasn’t exactly played like he did on clay. Not to mention Rafa had to cough up $2000 after Wimbledon officials fined the Spaniard for allegedly getting instruction from his Uncle Toni during his third round win over Philipp Petzschner

There was the James Blake, Pam Shriver incident.

The Queen made her return to Wimbledon for the first time since 1977, and it’s clear her majesty hasn’t exactly been watching BBC Sports in the 33 years since. During an exchange with Martina Navratilova the queen asked the nine time champion “if she had played Wimbledon often.”
That aside, it seemed to give a lot of the players a real kick and I’m sure most would like it to become an annual event.

There was a really, really, REALLY, long match between John Isner and Nicolas Mahut. Then of course as the week wound down, everyone enjoyed the customary Sunday of rest.

All that said, it’s championship week and the quarter finals were set today, and aside from Andy Roddick getting stunned by the 84th ranked Yen-Hsun Lu everything looks to be in order.

Quarter final number one pits a refreshed Roger Federer up against 12 seed Tomas Berdych who is quietly having an outstanding season. The big Czech is coming off a semi final appearance at Rolland Garros and if it weren’t for Roddick earlier in the season, Berdych would probably have a title under belt in 2010. Not to be forgotten is the fact that Berdych has already beaten Federer this year, even though the Swiss held a match point serving at 6-5 in the third.
The former number one surely isn’t as dominant as he once was, but Wimbledon is his home turf and until someone not named Nadal beats him there, my money will be on the champ.

Looming below R-Fed (ya I made that up) in quarter number two is Novak Djokovic and Yen-Hsun Lu. Djokovic needed four sets to defeat Aussie Lleyton Hewitt and looked completely gassed towards the end of the match which included him having to call for a medical timeout after his stomach started to cramp. Djoker’s fitness has been an issue all year and I think if Lu plays like he has in the tournament thus far, the number three seed could have his hands full. Every big sporting event needs a Cinderella story right?

On the other side of the draw I think you’ll find what will prove to be the match of the quarters. Fan favourite Andy Murray will take on Jo-Wilfried Tsonga who has shown no ill effects from the leg injury that caused him to retire against Mikhail Youzhny at Rolland Garros. Tsonga has been absolutely smashing the ball all tournament, and if it weren’t for Isner and Mahut’s record breaking clash, he would be leading the field in aces. Despite how well the Frenchman is playing, Murray has advanced one round for every year he’s played Wimbledon and I think that will continue. With the hopes of everyone in the UK on his shoulders Murray is my pick.

In the final matchup we see a rematch of the French Open final from this year: Robin Soderling, versus Rafael Nadal. While this isn’t clay, Soderling’s big hitting has proven to be an asset once again as he’s powered his way through the field. Like I said up above, Nadal hasn’t played fantastic but he’s scratched and clawed his way to this point and I think thats what we’ll see in the match, a dog fight to the bitter end.

Luckily even even I’m wrong with all of my picks, the guy on the other side of the net isn’t too shabby which really sets up a great final week… even if the wacky and wild events from the first week fails to show up!

How much longer do we have to put up with Doug “I digress” Farraway on the morning show ?How can you fire people and not have replacements?I am now listening to ESPN Radio on XM but they do not do enough or not any hockey.This is just crazy!Do you know if there is a plan in place or will we have to put up with this crap all summer?
CFL football is starting up this week and the guy who knows as much about the game as anyone is gone?Mike Hogan was the #2 guy at the fan by far!!!And to let him go is just a joke!!!And to compound it by not have replacements in place is even more of a joke!!!