Humour In The Toronto Sports Media 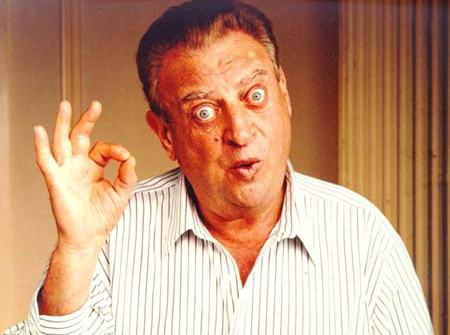 Ahhhhhhhhhhhhhhh yes. Must be a full moon out there. First the Toronto Sun published an odd, yet lame photo on Nazem Kadri on the cover of their much improved (no Loewen) sports section, then Brian Burke lowered the hammer in response. Then in a different matter Richie Rich Maclean hammered Darren Millard on the Sportsnet hockey preview, and Millard recovered well with Kypreos:

Ok, so first the cover- courtesy the fine folks at PPP and Jeffler 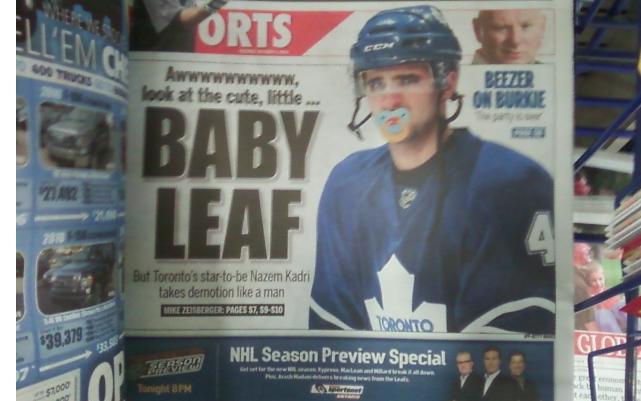 The odd thing about the photo is that the story that it teases is about how well Kadri is dealing with his demotion.

Brian Burke hit one out of the proverbial park when telling Sportsnet:

“The (Toronto) Sun has great value if you own a puppy or a parakeet.”

Now that is gold Jerry, GOLD….

Meanwhile this evening on the set of Sportsnet’s hockey preview Richie Rich MacLean- who went to town on hockeycentral at noon (love the new/old/new name) on the Sun and then about Andrew Krystal’s interview with Kadri’s dad this morning.

The highlight came when Darren Millard was talking about Roberto Luongo and the Vancouver Canucks, when Millard intimated that Luongo gave up the captaincy, Richie Rich replied with:

Then later in the show, Theo Fleury was talking to Nick Kypreos when Kypreos said to Millard ” you should be on the “battle of the hosts”? Millard, much to his credit quickly responded with, ” I lost that one already”.

Finally, Steve Simmons posted a great Ron Wilson story on his blog, you can find it here
All in all a good day in the big smoke.

On Wednesday’s edition of the TSM Pressbox I will be talking to Sean Mccormick, formerly of Sportsnet, now a candidate for Toronto City Counselor. Email or post any questions, I will try to get to them.