There Comes A Time to Just Tip The Hat 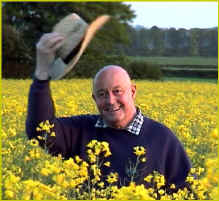 We’ve all in our lives been beat. You know the feeling, no matter what you say or do, you know your going to lose. On those instances we often say something stupid out of retaliation, when instead what we should have done is just lost with grace, tipped our hat to the winner and moved on.

So, when the Toronto Sun ran a photo of Kadri with a pacifier in his mouth, that was the opening shot. When Brian Burke struck back with “The (Toronto) Sun has great value if you own a puppy or a parakeet.” It wasn’t another shot in a battle, it ended the war. Burke won. Plain and simple.

Steve Simmons wrote the proper thing on twitter, that is that the Sun crossed the line with the photo and Burke did as well with the comment and it was time to move on.

“Which proves once again … when it comes to the Leafs, the media in this town (a certain evil tabloid included) are like hungry chicks demanding to be fed, and Burkie is the mother with the worm.

He says something and everybody chirps.

“He reminds me of the Wizard of Oz,” former Edmonton Oilers coach Craig MacTavish once said of Burkie. “You comb his hair, put a white shirt on, wheel him out in front of the camera and he’ll say whatever you guys want.”

That from Steve Buffery. What an odd statement. I mean the Sun(which I will admit I pay to have delivered to my house 7 days a week), more than any other paper covers every possible store angle on every possible leaf story. No paper covers the Leafs like the Sun.

Buffery wisely recognizes what a great line it was by Burke, “But you have got to give Burkie props for the parakeet line. It’s a classic.”

Yet he fails to just tip the hat and comes back with :

Talk about a lame comeback. Did the powers that be at the Sun demand these guys write a response????

I mean would anyone think that the Sun was scared or “beaten” by Burke if they didn’t respond????? Why not just leave it alone?

“But what I don’t understand is the rage. And not just about that cover. Hey, I grew up in Toronto and was a big Leafs fan. The passion and devotion? I get it. But, yikes …

But there’s a segment of Leafs fans that go nuts at the smallest perceived slight against the blue and white.

I didn’t realize just how horrible a human being I was until I started writing about the Leafs. ”

I didn’t see all that rage on the cover, I personally looked at it and after I read the article it teased wondered why the hell the photo was there in the first place. Someone asked Burke about the cover (which was clearly done to garner a reaction, to get people talking) and he responded. Isn’t the rage now coming from the Sun itself????

Joe Warmington couldn’t roll over and let sleeping dogs lie either “If anybody should know about icing a team of dogs that was for the birds, it should be Brian Burke.”

You’ve lost this round. Your beat. Why not just leave it alone?

“For a guy who led his team to 29th place in the NHL last season, and who traded away two potential first-round lottery draft picks, perhaps the Leafs loud-mouth GM should criticize his own performance.

But Bombastic Brian loves to talk. He’s got some good lines, too. Scribes love Burkie. Better than a boring GM.

I’m curious, what did the person, who ordered and or approved the photo think the Leafs would say?? I mean, unless I am wrong, it’s the first time a graphic like that has been used in these parts in a long time. It was done to elicit a response. Now there not happy with the response????

“Leafs Nation doesn’t care what newspaper he disrespects as long as he gets his job done. He has another chance to show that starting tonight against the Montreal Canadiens.”

See, here is the funny thing. Leaf Nation does care. Isn’t it obvious. “Leaf Nation” seems to be a lot more protective and emotionally invested than many seem to think. I am not defending, but rather stating the obvious. Some in the media have dumped on the Leafs for so long that people care more than they should.

“We get it that Burke and his sour-puss coach, Ron Wilson, think people here don’t understand hockey, and that they are wiser. What they don’t seem to understand is we can pick a huckster out of a crowd pretty fast, too. We have experience.

What neither has also figured out is in this Leafs-crazed town you don’t have to scream to gain attention for yourself, humiliate players or to mask your own questionable decisions.

You just have to whisper. ”

As I’ve said here before, I am tired with Ron Wilson’s public act. I’d be much happier if he just coached. Answer questions he is faced with sans the attitude and just coach. In Burke’s defence, he didn’t bring this on. The Sun did. Does anyone want a GM that doesn’t stand up for his players? It’s one thing if the attack were warranted, but the article hailed Kadri for dealing with his demotion. If the image was of Kaberle after his Dad allegedly blabbed about his unhappiness, at least it would make sense.

Yes, talk is cheap, but that works both ways….

“No more excuses, no more benefits of the doubt and no more patience. No more honeymoon.

It’s time for this Maple Leafs team to make the playoffs or come within a roll of tape of it.

That’s the type of comment I love. I love the media, or some in it saying that it’s time for the Leafs to make the playoffs and then to write later that the FANS won’t tolerate a total rebuild.

As a boss of mine once said, you can’t suck and blow at the same time.

“Meanwhile, the Leafs have their beautiful two new condo towers built, the best sports bar around open, a cool new Longo’s grocery store with a boutique hotel to follow.

It’s all good but fans want a cup. The truth is Maple Leafs Sports and Entertainment (MLSE) does most everything right — off the ice. They are charitable and they help build the city. MLSE is a great employer and envied entertainment company.”

Warmington ends well, I just don’t know why he went there in the first place. Why not just tip the hat and admit when someone else has landed a blow.

if Burke had said “i’m not going to dignify that front page photo with a comment” then none of this happens. the Sun needs to sell papers. getting into a slap fight with the GM of the Leafs will sell more papers. i’m not sure what is in it for Burke.

Burke’s ego is what drives him to be so frank with the media. As a listener and a reader this provides a lot of entertainment, but the downside is that he allows himself to be baited by the media. He won the “oh snap!” battle, but the Sun will be more than happy to keep the war going.

TSM – your blog would be so much more credible if you didn’t end most questions with “????” It is not very unprofessional.

I meant “it is not very professional.”

I am totally unprofessional!!!