Don’t Stop Believin’ In These Leafs 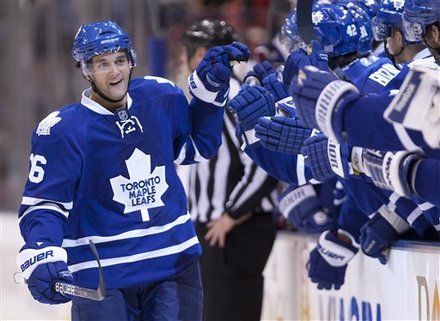 As I sat here after the Leafs victory in Pittsburgh last night, making them winners of three straight, my friend sent me a link to Journey’s ‘Don’t Stop Believing.’ You see, he is of the former Leafs fan type and shall remain nameless, but his name rhymes with Jason Polyzotis. Anyways, he got tired of the losing a few years back and jumped ship to Ovechkin & Co. in Washington. He knows this is Detroit’s song, but said “Toronto can borrow it for now.”

Of course, I took it in a completely different fashion and thought that I should make it Toronto’s song.

So, I present to you lyrics to the Maple Leafs’ version of ‘Don’t Stop Believing.’ I hope someone who can sing (or even someone who can’t?) attempts to sing this with the same beat as the original, except new vocals, all applicants are welcome.

My lyrics are bold and to the left of the original lyrics.

Just the Toronto Maple Leafs // Just a small town girl
In a city where hockey never sleeps // Living in a lonely world
On the jersey, it’s the blue and white they wear // She took the midnight train going anywhere
Just a city’s dream // Just a city boy
All they desire is playoffs and silver // Born and raised in South Detroit
One day again, Stanley will reside here // He took the midnight train going anywhere

Once again, like the good times years ago // A singer in a smoky room
Oh hot damn, Kessel’s a snipe show // A smell of wine and cheap perfume
We want a win every game and night // For a smile they can share the night
Oh let’s chant, go Leafs go // It goes on and on and on and on

{Refrain}
Truculence, testosterone, pugnacity and will // Strangers, waiting, up and down the boulevard
These guys score, these guys fight // Their shadows searching in the night
Masked men patrolling the blue crease // Streetlight people, living just to find emotion
Gustavsson and Giguere got this tonight // Hiding somewhere in the night

These Leafs stole my heart // Working hard to get my fill
Since I was a kid, from the start // Everybody wants a thrill
Watching every game full of hope // Paying anything to roll the dice
Every damn night // Just one more time
Some they win, some they lose // Some will win, some will lose
But for Alfredsson we always boo // Some were born to sing the blues
Damn, Canada’s game is awesome // Oh Oh the movie never ends
Oh let’s chant, go Leafs go // It goes on and on and on and on

Maybe one day it will be played at the Air Canada Centre.

Hey, a guy can dream can’t he? Don’t stop believing.

UPDATE: If this song actually gets produced I’ll re-name it to ‘Don’t Stop BeLeafing,’ kudos to @PatStorto for the tip.