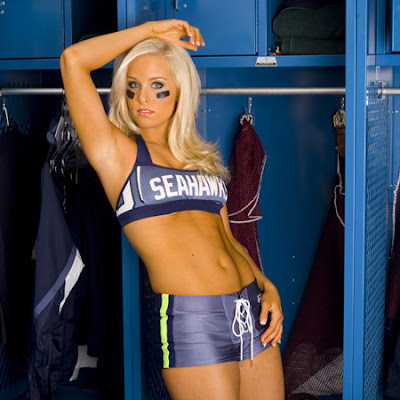 Reason to watch: Well the old saying goes “you don’t know what you got till it’s gone” was exactly the case when QB Todd Collins started last week in place of the injured Jay Cutler. Collins had one of the most brutal outings for a quarterback in a win, dude was 6 of 16 for 32 yards and 4 picks. The scariest part was RB Matt Forte was on pace for an 800 yard game with 8 tds midway thru first quarter, but the Bears seemed to abandon what was working versus Carolina.

Seattle is coming off the bye week with a new toy in RB Marshawn Lynch, but absolutely nobody knows how he’ll perform behind an average offensive line but also that Lynch hasn’t done much since the 2008 season, when he barely rushed for 1000 yards. The Seahawks traded WR Deion Branch to New England this week, leaving Hasselbeck with a receiving core of Mike Williams (USC), Deon Butler, and rookie Golden Tate (OH GOD!)

Reason to watch: The banged up Packers will have QB Aaron Rodgers under center Sunday, but he’ll be without TE Jermichael Finley, who was developing into the Antonio Gates of the Midwest. The Pack might also be without “Super freak” LB Clay Matthews, the league leader in sacks (8.5 in 5 games) suffered a hammy injury in an upset loss to the Redskins. Packers haven’t been the same since RB Ryan Grant went down at the start of the season.

Last time we saw the Dolphins was two weeks ago on Monday night and they were getting tossed in a dumpster like Jeremy Piven in Old School by the Pats 41-14. QB Chad Henne maybe start feeling the heat again from Chad Pennington (there was a reason the Tuna kept him around) and Tyler Thigpen. CB Vontae Davis, the younger brother of 49ers Vernon Davis, is developing into a great cornerback and a fun player to watch.

This should be one of the better 1 o’clock games.

Reason to watch: My favorite nickname in the league right now is for Chargers GM A.J. Smith “The Lord of No Rings”, Smith is notorious for being difficult with other general managers, signing his “own” guys to long term deals (i.e. Matt Wilhelm and Nick Hardwick), giving up on guys like Drew Brees, Ladainan Tomlinson, Rodney Harrison, and Junior Seau, while treating his own players like garbage like Vincent Jackson, Marcus McNeil and Shawne Merriman. So far another slow start has Charger nation in a tizzy, but the loss to OAKLAND (yea OAKLAND) has them more worried then usual. Lucky for the Chargers, LT McNeil has decided to return so they can move the over the used and abused Brandon Dombrowski back inside.

Reason to watch: As my friend ZZ LaBreezy says, the Pats laid the Pee-Pee smack on the Dolphins two weeks ago, then traded away WR Randy Moss to the Vikings. New England then brought in Deion Branch to help young receivers like Brandon Tate and Julian Edelman be professionals, help break down game film, and do things the Patriot way. Branch’s adjustment back to the Pats will be minimal, while the system may not be the same the theories and verbiage are. Plus, Branch has Wes Welker taking most of the attention anyway. Now the Pats defense is a big question mark, will it be the Pats D that showed up in Miami making plays in the backfield or the Pats D that got lit up by Ryan Fitzpatrick and the Bills.

The Ravens are probably 1 or 2 on any power rankings you see this week. The Ravens have been doing on both ends of the field, the defense thats missing several keep players is holding teams to 14.4 points a game and only 156.6 passing yards a game (with no Ed Reed). DT Haloti Ngata is one of the best defensive players in the NFL right now and will probably cause a ton of havoc against an average Pats o-line.

New England is 7-0 under Belichick after a bye week, or something like that. Bet Pats.

Reason to watch: A fantasy players gold mine in this one. The Giants statically are playing great football right now 9th and 11th overall in passing yards (247.8) and rushing yards (130.2) and 1st and 9th in opposing teams passing (146.0) and rushing yards (98.6). QB Eli Manning has found a sweet connection with WR Hakeem Nicks, Nicks has 6 out Manning’s 8 TD passes. It looks on the surface at least the Giants have now found a formula for running the ball with Bradshaw and Jacobs. New York’s defense, that looked horrible the first 3 weeks, has really turned around under defensive coordinator Perry Fewell with 10 sacks in the last two games.

The Lions are the highest scoring team in the league right now with QB Shaun Hill (those 49ers fans can’t buy a break) but a banged up RB Javid Best and WR Calvin Johnson may limit the offense this week. Lions defensive coordinator Gunther Cunningham is one of the old school football guys in the league and love to bring the rush (also some memorable youtube clips from Hard Knocks). DT Suh and company could make it a rough one for Eli.

Reason to watch: The Falcons are flying under the radar at 4-1, no pun intended. Seems like most people remember the Falcons week one loss to the Steelers and tuned them out figuring the Saints will walk away with the division again. Well, Atlanta’s won four straight and head in to Philly well oiled machine looking to prove they can beat a quality football team like the Eagles. The Falcons do a great job of not beating themselves and don’t turn over the ball very much. The only player with a turnover on offense is QB Matt Ryan with 3 picks and one lost fumble thats it. And thats not even so bad when you consider that he plays quarterback and touches the ball on pretty much every play.

The Eagles are going to be a hungry desperate bunch to get their first win at home this season. Going to be interesting which QB Kevin Kolb shows up, he could cement Mike Vick’s place in Philly this weekend. FS Nate Allen, the rookie out of South Florida already has 3 picks on the season, not bad for the 2nd rounder.

Reason to watch: If you hated Colt McCoy at Texas and you have a long deep hatred for the Longhorns, this is your game. Poor Colt, first start versus the Steelers D thats playing as well as they did in their Super Bowl wins. The funny thing about this game is that both starting quarterbacks will be making their first throws of the season on Sunday with QB Ben Roethlisberger make his season debut. Nobody knows what McCoy’s stat line will look like at the end of the game but I’m sure S Troy Polamalu will have at least 1 INT.

Reason to watch: THE BUCS ARE 3-1! If thats not a reason to watch well you just don’t like football. The Neers as like to call them, have something going on these days, it’s very dysfunctional but it’s something.  Bucs QB Josh Freeman is taking a beating back there but is making plays with rookie WR Mike Williams ( the other, other Mike Williams from Syracuse). Williams a 4th rounder, who quit the team for unknown reasons at ‘cuse , had seven catches for 99 yards last week and TD.

New Orleans played the Arizona Cardinals last week and lost 30-20. Well done boys, Zona QB Max Hall was the first un-drafted to start a game in the first five weeks of the season. Which subsequently means he’s the first un-drafted quarterback to win a game in the first five weeks. Again well done boys. Are you ready for the real kicker (and no I’m not talking about what position Max Hall looks like he should be playing), the Cardinals did it all without an offensive TD (no receiving or rushing TDs). Brilliant! Well done! BRAVO! Ladies and gentlemen your 2009 NFL Champions. Hopefully they’ll show up this week.

Reason to watch: Kansas City is for real this year. Not many teams over the last ten years have gone into Indy and played the Peyton and the Colts that well. If only they had a quarterback, or is it only if they had a real No.1 wide receiver, no that can’t be it. There’s a real chicken versus egg debate going on in K.C. right now between QB Matt Cassel and WR Dwayne Bowe, experts and analyst can’t figure out who’s really keeping this Chiefs team from ripping the roof the NFL. The Chiefs defensive looks like it could the next great units for next five seasons with DE Glenn Dorsey starting to show real promise, LB Derrick Johnson and LB Tamba Hali covering everything from sideline to sideline, and CB Brandon Flowers and S Eric Berry shutting down the back field.

Houston shot out the season with a big win against the Colts and its all seemed to slow down from there. Losing LT Duane Brown to a suspension for violating the leagues policy on performance enhancing drugs, has really hurt this team and the offense hasn’t looked the same since. Back-up LT Rashad Butler hasn’t done a good job protecting QB Matt Shaub’s blindside, while the o-line has given up 7 sacks and 12 QB hits in the last three games.