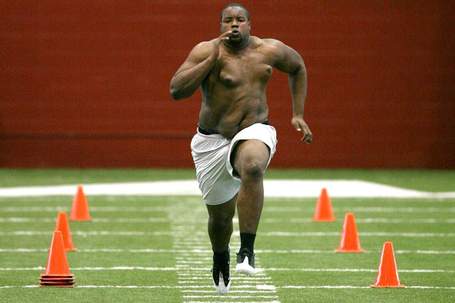 Reason To Watch: Two weeks ago, the Steelers were making a case for the best team in football, but with this crazy 2010 season, the Steelers are now just trying to prove they’re the best in the AFC North. The Ravens are 6-2 (should be 7-1 if it wasn’t for a terrible penalty taken by Le’Ron McClain week 6 in a 23-20 OT loss to the Patriots) and slowly pushing himself into serious title contenders. Pittsburgh lost last week in New Orleans on Sunday night (20-10) and the Steelers offense didn’t show up for the first time this year, being held to 279 yards (171 passing, 108 rushing).

The Bengals are riding a four game losing streaking that could tear this organization apart. With two games versus Pittsburgh, @ Indy, @ Jets, vs Saints, then Cleveland, San Diego, @ Ravens as your last three weeks of the season, things could come to a crashing end for coach Marvin Lewis.

This is a true make or break game for Cinncy, winning tonight could give them a confidence boost they need and regain last years form. Losing tonight, could finally push Chad Ouchcinco over the preverbal edge and demand out of Cinncy at the end of the year (I never thought I would write a sentence about a guy named Ouchcinco finally going over edge), axe Lewis, and completely re-vamp the offense.

Cinncy’s offense has been a complete disaster, RB Cedric Benson is frustrated with his role and his disappointing 3.8 yards per carry, down from 4.2 in ’09. Last season Benson broke a 100 yards in a game six times and four times in the first nine weeks. Benson has only broke 100 once this year and his next highest mark is 81 yards against one-win Carolina.

Bengals QB Carson Palmer has developed in to quiet the enigma, in his eighth season, Palmer is completing just 59.6% of his passes, in 2004 his rookie season he completed 60.9% of his passes so the regression is kinda mind blogging considering the talent around him. The No. 1 pick in the 2003 draft looks light years away from the dude who threw over 4000 yards in 2006 and 2007.

Sum It Up: Pitt covers this one, but the first half is going to be closer then we all expect.