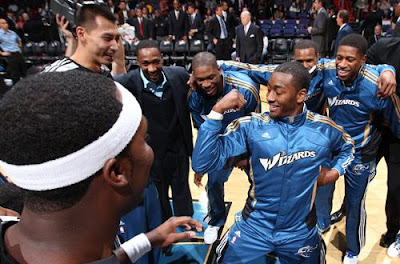 Reason To Watch: No.1 pick John Wall is questionable for tonight’s game against the Raps. This is great news for Toronto, because not only does this make this game winnable, but John Wall (if he plays) would make Jarrett Jack and Jose Calderon look silly, and single handily killing both their trade values. Of course, all bets are off if Wall plays.

Toronto managed to catch a Magic squad that looked uninterested to be there, and ended a six game losing streak with the victory (110-106). The Raps then followed up that win with a solid performance in Miami against a struggling Heat squad. The Heat would end up winning 109-100, giving the Raps a fourth straight game where their opponent scored over 100 points.

DeMar DeRozan really blew up on the Florida trip. DeRozan scored a career high 26 points against the Magic, then followed that up with 21 points against Miami. The No.9th pick in the 2009 draft, has done a really good job going to the basket with toughness and getting to the free throw line. In the last two games, DeMar has been the line 23 times, making 17 of them. In the previous three games, DeMar only went to the line twice, missing both.

DeRozan reminds me of the Sixers Andre Iguodala. Both are freaks physically and can seemingly drive the lane against any shooting guard they line up against. But the thing that separates Iguodala from the All Stars and Superstars is a lack of a solid mid range game and no three point shot. Right now, it looks like DeRozan will never be a threat from three, things that made Jordan, Kobe, McGrady, and guys like Durant so dangerous.