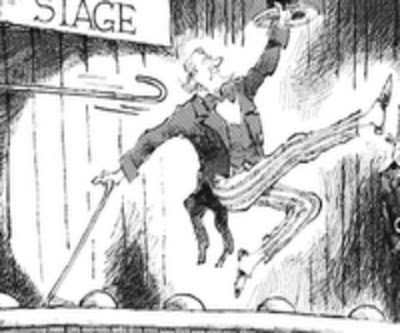 Listening to interaction between Dunleavy and Brady close to the end of the show, I still wonder why they didn’t just keep those guys together, have Brady do most of the talking and Dunleavy coming in every now and then, or have Dunleavy be the co-host & have somebody else do sports update. I still think that works better than Brady and Lang.

Not sure what to think of Vendetta, I think he’s done a good job interviewing people as I listen to the first couple of hours of yesterday show and he has a pretty quick sense of humor. But like what was mentioned yesterday Morning thread by others talk of constant “hot chicks” can get tiring.

Vendetta not a fan of bloggers. Yesterday he give the gem that the first syllable for blog is bla, and repeats the same thing today, while in the same breath complaining about spelling mistakes on blogs. Umm he does know the blog is a single syllable word, right?

Rick Reilly was his guest today, who also thinks there’s nothing positive about bloggers. Thinks that credibility only comes from formal training and mainstream publication is his opinion. Strange as I think most things get traction & leg work from blogs these days and not the mainstream.

Disagree with you about Dunleavy. He’s good on PBP, but I find him very bland in a hosting role. Kind of ‘hokey dokey’ if you what I mean.

@Rome, I enjoy Dunleavy’s work too, but I think part of the problem (ours, not his) that may have prevented that scenario is the P-B-P work that he does takes him out of the station frequently, and I’ve heard him speak of how much he enjoys that, so then you’d only have a P/T side kick.