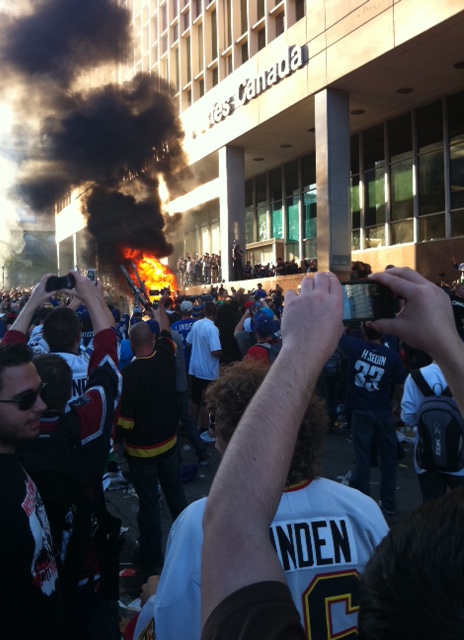 All canucks/bruins
and Argos of course 🙂

Just wondering, would we have seen vandalism like this in downtown Toronto if (and I know, a REALLY BIG if) the Leafs had lost this game at home?

Tweet from Bill Walton –
“Vancouver police have turned to Plan B to stop this madness. They’ve called Tim Thomas into action considering he’s stopped everything else”

Typically when a riot like this occurs, it is a group of thugs/gang tpye element that look for an event like the Cup loss as an opportunity to riot/loot/burn etc…

In looking at many pictures I am shocked at how many individuals are wearing Canuck jersey’s doing this. Again, in past Montreal Riots, the troublemakers starting everything were not wearing jerseys and were essentially gang members.

I don’t think it would be as bad in Toronto, only because I think our police through G8 etc… are getting more experienced identifying the trouble makers and dealing with quicker.

If I am the Canuck organization I am sending a cheque to City Hall, because that appeared to be alot of Fan BullShit going on. Great Tweet by Walton.

Ha at TSM Argo comment. BTW, lead story on TSNRadio…. Huge story from BC….. The BC Lions won opening CFL preason game in Calgary… Nothing else happened concerning anything in BC…. Okay maybe not.

Mr Hot & Cold Arthur (who was hot yesterday lol) wrote during the “post game street activites” how annoyed he was with people saying “These aren’t hockey fans” while a quarter of the people are wearing a hockey jersey. Brady this morning repeated similar opinion. Thank YOU! I am so sick of this hockey culture here that acts like hockey fans are these sainted people who would never act like idiots & are so above anything. Hockey fans are just like anybody else, you have cool people, you also have losers, idiots and jerks.

If this happened when UFC was either here or there in VanCity and people trashed the street while wearing “Tap out” muscle shirts after the event, I will bet pretty high that most of the mainstream would quickly say “See look at those UFC fans” same if it happened a soccer, basketball or something like cricket it would be something like “those people” are causing problems. So thumbs up to the likes of Brady & Arthur for pushing back against the “saintly hockey folks” because we all know every hockey fan who’s not watching hockey spends all their time with family reading the bible.

Okay I will say something I haven’t said too much, but here it goes. Thumbs up also goes to TSNR last night for going to their Vancouver affiliate was really strong, the post game host was great, the over night host not so much “He was really going strong on the there might be a handful of hockey fans” really dude lol. But even saying that, listening to people and callers from there talking about what went on in the ice and now on their streets was easily much more intersting than listening to Sammut talking to a guy from Barrie about how he happy for Cam Neely

Dave from the suburbs

Rome said:
” I am so sick of this hockey culture here that acts like hockey fans are these sainted people who would never act like idiots & are so above anything. Hockey fans are just like anybody else, you have cool people, you also have losers, idiots and jerks. ”

Thank you for posting what was thinking. Since when is the average hockey fan a cultured, single malt whisky sipping, Steely Dan listening aristocrat? I’d say just under the majority are cement heads.

I agree with Dave and Rome. The ‘good Canadian hockey guy’ is tiring.

As for the riot – I honestly don’t think this would happen in Toronto.

Our closest comparison was 92 and 93, and those were extremely peaceful. I believe there were a few injuries, but nothing major.

Now, I know the Leafs winning (or losing) a game 7 would be unique and different from anything else. But different enough that fans would trash the city? No. Maybe I could see it if the 92/93 celebrations were anything but harmless.

Lets not forget – those celebrations in 92/93 may not have held the same emotion and passion that a Leafs win would, but they were seriously huge parties. Plenty of opportunity for things to go awry.

As for the riot itself, I’m absolutely disgusted. The video footage is really disturbing.

As a Canadian I’m embarrassed. That city should be ashamed.

Will be interesting watching the courts protect all those innocent kids who just happened to start a fire, or break a window, throwa rock at a cop but never deserved to be roughly handled by a police officer.

“Hockey fans are just like anybody else, you have cool people, you also have losers, idiots and jerks.”

So true. I heard Eric Duhatsek say something like ‘these weren’t hockey fans, they’re thugs’ and a similar sentiment from many others.

Um…you don’t think thugs can be hockey fans? If you’re a hockey fan you must be a decent guy? Give me a break. As you said, every sports’ fans has good people and has idiots. (Been to a Jays home opener for example? Douchebag Central. And I love the Jays)

Don’t get me wrong, there’s nothing about hockey or the Canucks that led to people acting this way, but it’s silly to pretend a ton of dudes in Canucks jerseys aren’t fans just because they’re behaving terribly.

I think the point Eric was making was that those rioting weren’t necessarily hockey fans. It wasn’t like the riots happened because the Canucks lost. These clowns were there to riot. I agree with him. These morons were going to riot no matter what happened.

Agreed. Our legal system is a joke.

I am having a tough time with the city being ashamed line. Not from you Daniel, but the rhetoric in general. A bunch of ass clowns does not a city make. As I have said earlier these guys came to riot. Personally, I think the general public using social media to help id these dipsticks and how the city deals with them will be more telling.

Would it happen in Toronto??? The g20 happened here. My hope, initially anyways would be that enough common sense would kick in and the public would help apprehend the jackasses who were looting. Having said that, I saw what the rioters did to the one guy who did just that and that was really pathetic.

Author
torontosportsmedia
Reply to  Dave from the suburbs

I don’t think you can paint with that broad a brush to be honest. In Toronto anyways, how many “average hockey fans” are there? To try and classify them one way or the other doesn’t work.

I like listening to Sammmut at night. Better than a lot of the alternatives.

There is only one good thing Gerry, these idiots are ALL easily identifiable. The question is how much or how little will the Canadian justice system deal with them. Personally, I hope they are made an example of. Incarcerate them as long as legally possible. There is no viable defense available in my mind.

I think we would have seen it in a lot of places. Put 100k people in a tight area and there are bound to be morons. Hello g20

Also have to agree with Daniel, Dave and Rome. The ‘good Canadian hockey guy’ is tiring. “I’m cheering for the Bruins ’cause they have more Canadians”. Yeah, except MVP Thomas, a Big Z (ask the Sedins how important he was) are NOT Canadians.

I think your point is valid. However I don’t think there are a whole lot of people making the point anyways

I think by saying ‘those rioters aren’t hockey fans’ or ‘they aren’t Vancouverites, they’re anarchists that flew in’ it’s like we’re not taking accountability for the fact that there is an element of our society that is capable of this.

Unfortunately we have total dirtbags in our country and culture like everywhere else.

Bruce Arthur had an excellent article about this (in my opinion). Pretty much summed up my thoughts exactly: http://tinyurl.com/3j7gxmr

“I am having a tough time with the city being ashamed line. Not from you Daniel, but the rhetoric in general. ”

Another good article by Arthur. I love seeing people out these dipsticks right now though.

It’s really disturbing. The only positive comes now as these guys get totally embarrassed.