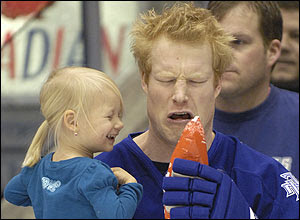 Please make note that in lieu of Wade Belak’s death, these guests are subject to change.

3 goons dead in 6 months, 2 suicides and an overdose, but I doubt that any of these “insider” guests will have the balls to state the obvious…

The only hockey that I actually watch are the World Cups/Olympic tournaments. There is no fighting or you get thrown out of the game immediately plus the rosters are full of actual skill hockey players, not sprinkled with goons/enforcers.

Bettman has singlehandedly destroyed the game for me, by allowing the game to be played the way it is. Hockey is the only team sport that allows fighting. Isn’t this why we have referees.

I have no doubt that the game is allowed to function in the way it is because the NHL feels that cleaning it up would take a financial hit for them.

What I don’t get is how the NHL union has allowed their players to be used as gladiators, and you can throw in the head shots as well, which even today, the NHL has not dealt with harshly enough, not even close.

I don’t bother with the NHL, and have lost any emotional connection to the game. I feel bad for those fans that do, and have to see their stars get concussed on a regular basis.

#1 Bigger, wider ice surface as the players are bigger/faster than ever. If you don’t change this, then play 4 on 4 hockey the whole game. Yes, I know, less jobs and the union will fight it, well, too bad.

#3 The OHL is going to softer pads for their players. Kudos to Branch for taking this vital step. The NHL should follow suit immediately.

#4 The players have to respect each other on the ice. Not sure how to change this, but Fehr and the union must drill it into them.

I’m not a fan of fighting in hockey or an apologist for the NHL but why are so many people blaming the NHL, fighting or even Don Cherry??? Hockey provided a lucrative career for a guy with no hockey skills and like most goons leaving the game he had a job lined up with the Preds broadcast team. Its also been reported Belak had never suffered a single concussion in his 15 yr career.

Obviously I feel bad for his wife and 2 little kids.

Roger, I don’t want to be a dick, but you said it better then I could, …”a lucrative career for a guy with no hockey skills…” and that’s exactly the problem…

I don’t know about you, but would you not rather have a team full of guys who can play (and defend themselves if need be), or the bullshit we have now?, 30+ designated goons whose only real function is get punched in the face repeatedly 80 nights a year??

…and lets not forget that while he may have never had a “reported” concussion, doesn’t mean he didnt have a pile of them and either ignored them, or hid them from his medical staff.

The whole purpose of fighting in hockey is to actually CAUSE concussions, and as long as Bettman and Campbell refuses to police the game, I’m done with it.

What i do know is that if fighting is so important to the game, shouldn’t there be more of it in the playoffs when each game is worth so much more???

Instead, 90% of it dissappers, so clearly the idea that it is part of the game is pure bullshit…all of this on the same day we learn that Marc Savard will likely never play again from post concussion symptoms…I hope Steve Moore wins $100M in his lawsuit, that might wake people up…

I agree Chef. The irony is that we (the fans, media and players) get angry when we see a cheap shot by a player YET, we’re on our feet cheering when two meat heads are throwing bare knuckle punches at each other’s face.

We also celebrate these said meat heads – check the stands of any NHL game and you’ll see as many if not more jerseys of goons than that of the star players. Also, when they retire most seem guaranteed to sit on the analyst’s desk at TSN or Sportsnet. Wouldn’t it make more sense to hire someone who actually played the game properly or a successful coach?

So Sad – seemed like a really good guy…both as a teammate and for fans to relate to. He seemed to be transitioning from retirement into a post playing career.

Tough to say what the trigger was when the guy seemed OK only a few days ago…No one seems to have come forward to say he was struggling with any personal issues. Maybe the story will clear up in time (it’s not really any of our business, but we’re all going to be curious as to why this happens).

There is no telling how personal issues (financial or relationship related) can affect a person – and if he didn’t get help in the short term, he was willing to do something irreversably self destructive. When there are children involved, this isn’t just a ‘temper tantrum’ gone wrong.

On the drive up to Barrie today for a meeting, and the guy driving had The Fan on. Is there ANYBODY Vendetta does not know or is goods friends with?

And in other news Sportsnet just sent out there latest survey, asking for like/dislike on a couple PTS combinations, Sid and Tim, Jerry and Alan, Mike and Mike, and a few others.

@ Al- once Joey Vendetta and the Pope were walking down the street and a passerby says to the guy beside him ‘hey…who is the guy with Joey Vendetta?’

All he does is name drop and mention he works for Live Nation. Pathetic. I would prefer the Deacon…how sad is that

It’s a shame and a stain on the legacy of the other NHlers and former players that have died in the last 20 years that it evidently requires the suicide of a former Leaf player for fans and media to finally come to terms with the fact that too many are dying too young.

I listened to Brady early on because he was certainly a voice I wanted to hear on it, but I wasn’t able to catch Marek. I don’t know what to make out of Marek, before he got into hockey he was mostly talk about ring/cage sports. He was a constant loud voice being critical of organazations who don’t protect their athletes & he turned out to be correct. He goes to 640 & talk general sports. He then turned into hockey fight guy, pumping & promoting hockey fights. I wonder if he’s moved from that opinion especially after current events.

Nothing gets me going more than the hockey fights fans. Especially in other places, their talking points are the same. First the silliest, it gets the crowd cheering. Well so does a loser jumping on the field, we don’t have that guy a contract because he gets a strong crowd reaction.

The other thing that pushed by hockey fans is the notion that hockey is such a different sport that it needs fighting. I still put that in the inferiority complex hockey fans have that somehow they need to think their sports has better guy, and the sports is more intense and passion played compared. That’s the reason there’s fighting here and not anywhere else. Hate to break it to them, hockey is not special. Every other sports has passion and intensity.

Of course my favorite, if there no fighting, more cheap hits will happen. Okay, there is cheap hits in every sport. Guys can give physical fouls against star NBA players, but they will get T’ed & thrown out. Guys can give a late hit on the QB or sidelines in the NFL but they get flagged & thrown out. In soccer you can slide in with your cleats right against a guy shin, but you get a red card & thrown out of the game. Every sports has the possibility of cheap hits, yet somehow control the chaos. But hockey the only place that you need fighting? Of course the pathetic part is that it’s the sports who has most star players missing games due to cheap hits.

Great Post Rome, question i have is why are the only 2 organized team sports that allow/promote fighting Cdn. based sports – Hockey/Bagataway (Lacrosse).

We pride ourselves as Cdn’s for our civility, peaceloving etc.., yet in our sports we want Roman Gladiators as our heroes.

No reason figting can’t be banned. Yah the odd one will break out, the players will be punished, their choice how often they want the punishment.

Last I checked nothing makes the crowd cheer like a beautiful goal, an OT goal, a game winning goal and a great save as well.