Third segment: Interview with Patrick LaForge, President and CEO of the Edmonton Oilers

It seemed like Sid really didn’t want to talk about himself and leaving the Score, and tried several times to change the topic.  He tried talking about Manti Te’o and then successfully changed the topic to talking about Stan Musiel and Earl Weaver passing away before Bob got back to Sid leaving the Score.  I’m shocked Bob remembered.  Normally once you get Bob off-topic he either keeps going on that topic, or afterwards says “what were we talking about?” but he seemed really intent on getting Sid to talk.  Bob, in general, seems intent on getting Sid and Tim to talk about leaving the Score… this isn’t the first time he’s brought it up.  I know Rogers has bought The Score, so it’s no longer competition, but I wonder what the etiquette is in badgering somebody to talk about their previous workplace experiences and leaving it.  Tim seemed pretty comfortable, Sid kept making jokes and trying to change the subject.  He tried again a third time after Bob went back to the topic (by talking about the NFL).

The Rishe interview was really interesting, because it was an American business perspective on the NHL and Rishe’s priorities were clearly about the American hockey market, and growing that.  Bob seemed to disagree but was avoiding getting into a fight, but we’ve heard Bob’s opinions on it before and he doesn’t think the general American sports fan can be made to care about hockey, and you’ll always have the niche fans.

Those are very melodramatic Bodog ads that are playing during the podcasts now, calling the NHL lockout a “war” and that the NHL will “fulfill its destiny”.  I almost expected to hear something about the Death Star or the One Ring. xD

Also, TSM said I should post the Bingo Cards I made for PTS (just randomly generated on a Bingo card site) here, so here’s one sheet: 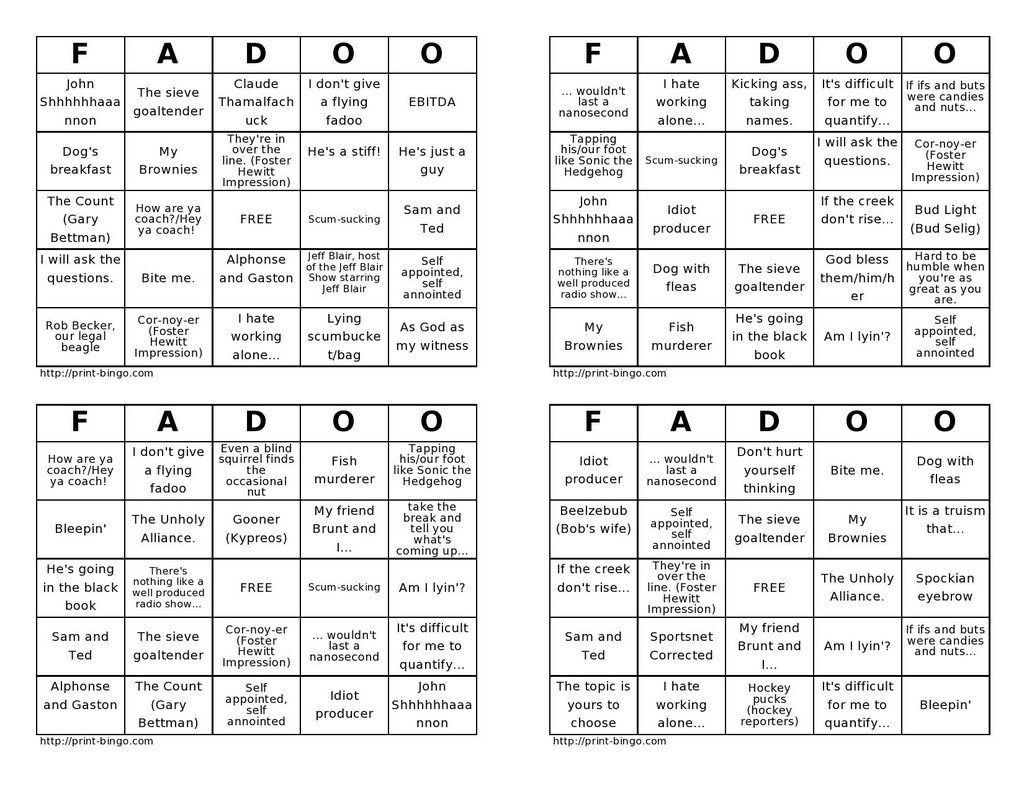 The rest of the sheets (for anybody interested in seeing all 5 sheets) are at: http://imgur.com/a/MrVs1. 🙂

Today (from what I can remember) Bob said:

I will ask the questions

take the break and tell you what’s coming up

the unholy alliance (I think)

Another Bobism (unless it was already mentioned) is “So in downtown (names city) at the corner of walk and don’t walk.”

The story of a fan who dressed up as Paul McLean and was kicked out. With a funny tweet by Bruce Arthur.
http://storify.com/CurtisGRush/moustache-and-all-senators-coach-paul-maclean-s-ha

What?! Lots of people are watching the NHL? You mean the rubes running their “boycott the NHL” campaigns weren’t successful in getting enormous crowds outside of arenas to chant and carry signs (maybe with “I’m ignoring you, NHL” or some other self-contradicting idea written on them)? Even after the likes of Steve Simmons, Bruce Dowbiggin, and Mike Toth told us they should be taken seriously? Then again, possibility it was just Simmons and Dowbiggin who were angry that their jobs were made to look somewhat more useless than usual with no NHL to write about for three months.

I can only speak for myself but have not and will not go to a gamE, buy merch, watch tv, etc this season.

Mike Toth is still around?

I would like to see ami present bob a radio card live on air!