I posted a little rhyme before calling it a night last night and a few twitter followers added to it…thought it was awesome enough to share:

Not a viewer was watching, as the ratings began to fade? (via @dalter)

Insiders were hung out to dry by the lack of news and talked for hours about a St. Louis deal for David Booth 🙂 (via @MikeinBuffalo)

What did/do you think of new Fan morning show????

May all your trades come true!

Dean Blundell or whatever this guys name is lasted approximately 20 minutes on my radio before I terminated the connection. This guy sounds too much like Brady yet another annoying whiney personality who knows nothing about sports.

Pelley Moore & Kollins should all be fired. It’s clear they have a fetish for annoying radio & tv personalities. The FAN590 has become an unlistenable joke and their hometown hockey crap has been an absolute flop. Time for changes these clowns collectively have given a whole new meaning to unlistenable goofball media.

I heard MLSE’s Maple Laughs are having a fire sale auction today!!?? LMAO

Be interested to hear or see rogers reaction to TSN creaming them in ratings for the trade deadline marathon show.
Not sure if they will publicly just ignore the terrible numbers they got OR will they blame it on a 20 minute power outage in Piss-Hole-Pass Alberta that produced inaccurate numbers.

If anybody is PVRing TSN, go take a look at the tweet that somehow made it to air at 951am. Thinking someone might lose their job over that one.

WestdaleRocks: What was the tweet? i didn’t PVR it

I was only able to listen to about an hour of the show this morning, but I enjoyed it. I hope he gets to keep it going.

Lupul sent out a tweet comparing tsn to tmz.

Not a good few days for tsn social media, after the dustin penner stuff.

Watching Sportsnet because TSN forces you to have cable to watch live feed. It is actually pretty good. I think people overexegerate how bad Sportsnet is.

Heard a little bit of Blundell. I thought it was fine… pretty good for a first show. Definitely doesn’t seem like the show will be a train wreck by any means. Blundell was much calmer and more reigned in than he used to be on The Edge. Actually I thought the show was a bit too dry if anything. Almost a little too sports heavy.

Another trade deadline day dud. Bunch of suits sittin’ around talkin’ bout nothin’. Just the usual castoff scrubs trading teams because that’s what Gary Bettman’s 30 team NHL is largely made up of these days SCRUBS!

And the delusional fools who pledge allegiance to Leafs Nation year after failed year will no doubt be dumbfounded to learn today that nobody wanted their overpaid garbage or fringe level 4th line NHLers. LMAO

Here’s a pic of the tweet that made the air. May have to copy & paste the link. 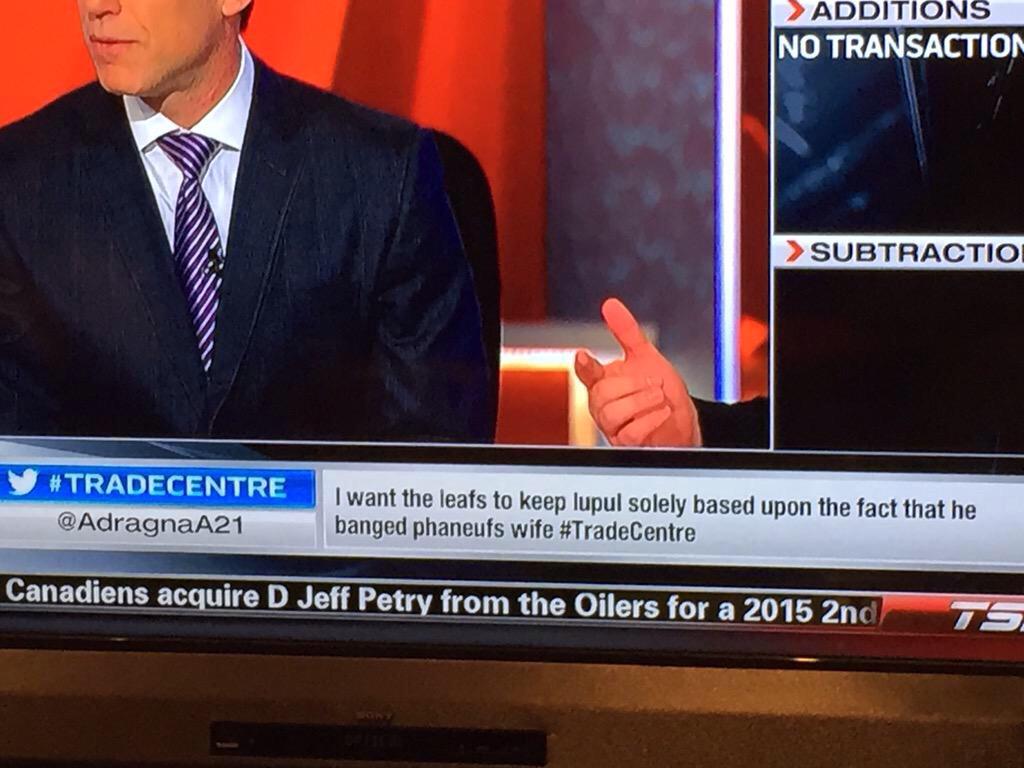 Jeff Marek has never been used properly since he signed with Sportsnet he should have his own show not a podcast IMHO. Marek would have been a far better choice for the morning show than Brady or Blundell. No doubt the reason Marek didn’t get the gig is because the Sportsnet braintrust prefers annoying whiney goofballs who know jack about sports instead.

For me, it will take some time to get used to 3 voices on the morning show instead of 2…makes it sound busy. Should be interesting to see how the show evolves over time.

I didn’t get to hear much of it (20 min or so), but I thought it was promising. Rusic was quite good in my opinion – much better than when I heard him with Sammutt or Ennis. Dean was definitely kept in check this morning – be interesting to see if this continues…

How many times did Rustic say ”Dean” on the show? if the person is sitting next to you why do you need to say Dean’s name dozens of times?

As for trade deadline, the whole thing is a joke. The fact that both networks turn the day into an event is ridiculous. How much time do we really need to spend dissecting which 4th liner was traded for a 3rd round pick? NBA deadline is so much better. Real players get traded. A sick Tim and Sid (I think they both had colds) forced themselves to the office on NBA trade deadline day because they knew it would otherwise be ignored by Canadian media.

Here are my thoughts on today’s Deadline day.
Overall (as we all could have predicted) the day was a colossal bore with ZERO trades of any significance. I’m starting to really get in line with the thought of throwing a league wide moratorium on all trades 1 week before deadline day, then making a real day of it. This would not only be a heck of allot of fun for us fans, but a major score for the network that would then have to bid on the right to broadcast the event, just a thought.

One thing of note, Penner posted a tweet saying that he called TSN within one hour of the original tweet with his Girlfriend to tell them he wouldn’t be in for the day. I’m pretty certain that TSN would have made that same call if he had waited just a bit longer, lol. Overall

My guess would be it could be quite the bidding war between TSN & Rogers for the rights to televise this type of show. To get exclusive rights, I wouldn’t think that either would have a very hard time coming up with a major sponsor (BMO, Scotiabank, TD, Canadian Tire, etc) for this type of show, my guess would be between the TV and online coverage it would be very close to 5 million viewers, probably more.

@Greg
I know. After he said “Dean” about a dozen times within a 10 minute span I had to turn it.

@ Greg/Antonio – I’ve listened to Rusic w/ Sammut a lot of times and repeating his co-hosts first name does happen a lot. Oh well I still enjoy the guy and think he’s doing a good job so far.